Working With Cron Jobs On Linux

Cron Jobs are used for scheduling tasks to run on the server. They’re most commonly used for automating system maintenance or administration. However, they are also relevant to web application development. There are many situations when a web application may need certain tasks to run periodically. Today we are going to explore the fundamentals of Cron Jobs.

First let’s familiarize ourselves with the terms related to this subject.

“Cron” is a time-based job scheduler in Unix-like operating systems (Linux, FreeBSD, Mac OS etc…). And these jobs or tasks are referred to as “Cron Jobs”.

There is a cron “daemon” that runs on these systems. A daemon is a program that runs in the background all the time, usually initiated by the system. This cron daemon is responsible for launching these cron jobs on schedule.

The schedule resides in a configuration file named “crontab”. That’s where all the tasks and their timers are listed.

Why Use Cron Jobs?

Server admins have been using cron jobs for a long time. But since the target audience of this article is web developers, let’s look at a few use cases of cron jobs that are relevant in this area:

Here is a simple cron job:

There are two main parts:

The command itself in this example has three parts:

This is the first part of the cron job string, as mentioned above. It determines how often and when the cron job is going to run.

It consists of five parts:

Here is an illustration: 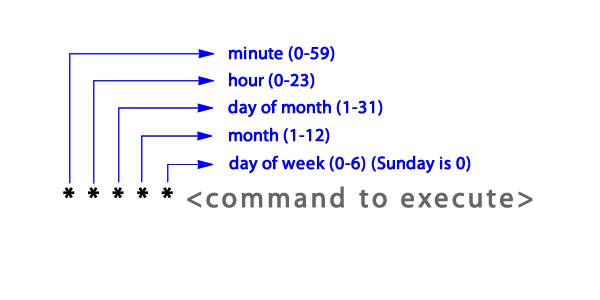 Quite often, you will see an asterisk (*) instead of a number. This represents all possible numbers for that position. For example, asterisk in the minute position would make it run every minute.

We need to look at a few examples to fully understand this Syntax.

This cron job will run every minute, all the time:

This cron job will run at minute zero, every hour (i.e. an hourly cron job):

This will run on Mondays, every hour (i.e. 24 times in one day, but only on Mondays):

You can use multiple numbers separated by commas. This will run three times every hour, at minutes 0, 10 and 20:

Division operator is also used. This will run 12 times per hour, i.e. every 5 minutes:

Also there is a special keyword that will let you run a cron job every time the server is rebooted:

Setting Up and Managing Cron Jobs

There are a few different ways to create and manage your cron jobs.

Many web hosting companies provide control panels for their customers. If you are one of them, you might be able to find a section in your control panel to manage your cron jobs.

Running this command will launch vi (text editor) and will let you edit the contents of the crontab:

So it would help to be familiar with the basic vi commands as it is quite different than any other text editor you might have worked with.

If you would just like to see the existing crontab without editing it, you can run this command:

To delete the contents of the crontab:

You can write all of your cron jobs into a file and then push it into the crontab:

Be careful, because this will overwrite all existing cron jobs with this files contents, without warning.

You can add comments followed by the # character.

As I mentioned earlier, by default the output from the crons get sent via e-mail, unless you discard them or redirect them to a file. The MAILTO setting let’s you set or change which e-mail address to send them to:

CGI scripts are executable by default, but PHP scripts are not. They need to run through the PHP parser. That’s why we need to put the path to the parser before the path of the script.

Sometimes it might be under another location like: “/usr/local/bin/php”. To find out, you can try running this in the command line:

If you do not handle the output of the cron script, it will send them as e-mails to your user account on the server.

The closing bracket (>) is used for redirecting output. “/dev/null” is like a black hole for output. Anything that goes there is ignored by the system.

This part “2>&1″ causes the STDERR (error) output to be redirected to the STDOUT (normal) output. So that also ends up in the “/dev/null”.

Outputting to a File

To store the cron output in a file, use the closing bracket (>) again:

That will rewrite the output file every time. If you would like to append the output at the end of the file instead of a complete rewrite, use double closing bracket (>>) instead:

Normally you need to specify the parser at the beginning of the command as we have been doing. But there is actually a way to make your PHP scripts executable from the command line like a CGI script.

You need is to add the path to the parser as the first line of the script:

Also make sure to set proper chmod (like 755) to make the file executable. 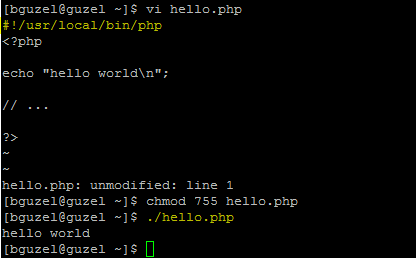 When you have an executable script, the cron job can be shorter like this:

In some cases you may have frequent running cron jobs, and you may not want them to collide if they take longer to run than the frequency itself.

For example, you may have a cron job running every minute. Yet, every once in a while it may take longer than one minute to run. This can cause another instance of the same cron script to start running before the previous one finishes. You can create too many busy processes this way and possibly crash the server if they keep slowing down each other, and cause even more processes to be created over time..

This problem can be addressed via file locking, and more specifically the non-blocking (LOCK_NB) type of file locks.

You can add this code to the cron job script:

When you write a cron job in a web scripting language like PHP, you may want to make sure that nobody can execute it by just loading it from their browser. One easy option would be to store these script outside of your web folder. However this may not be practical or preferable for some developers, if they want to keep their cron job scripts right within their web application folders.

If you put all of the cron job scripts in a folder, you block access by putting this line in an .htaccess file:

Or you can also deny access to scripts on an individual basis by putting this line at the beginning:

This will ensure that, when the script is accessed from the web, it will abort immediately.

This article is free and open source. You have permission to republish it under a Creative Commons license with attribution to the author and Teknixx.com